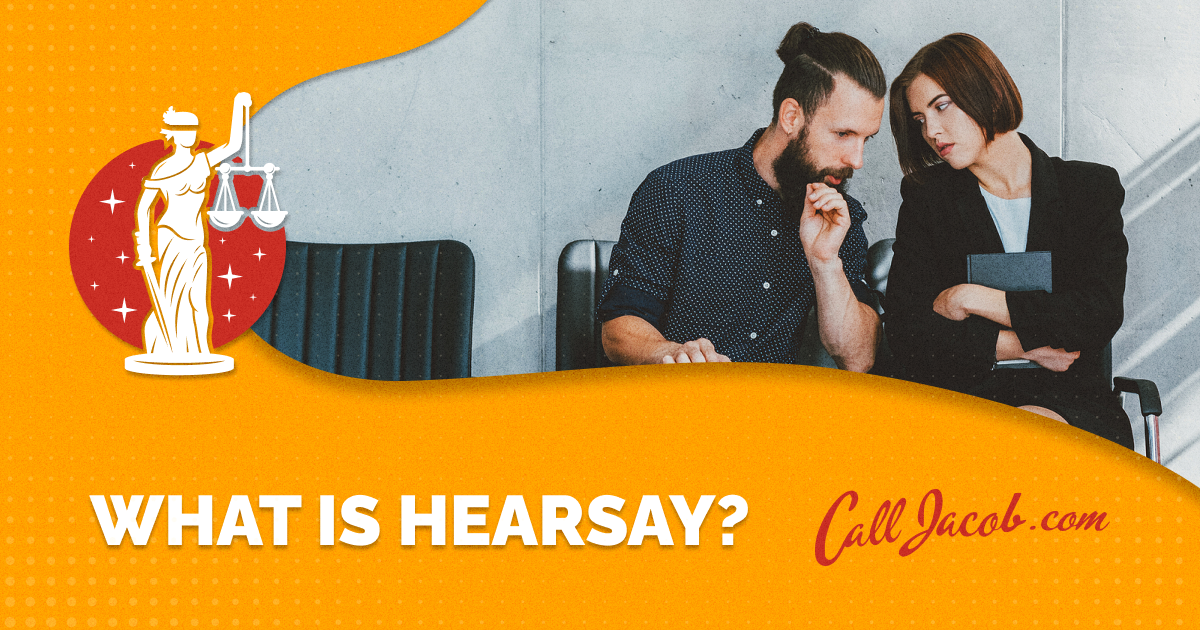 Hearsay is a term often encountered if you go to trial. Here, we’ll examine the meaning of hearsay and how it may impact your claim, lawsuit, or case.

While testifying in court, a witness may repeat a statement they heard someone else say. This is hearsay. It is made out-of-court and offered to prove the truth of what it asserts. In short, hearsay is essentially secondhand information that may have questionable reliability. Therefore, it’s generally inadmissible in court and cannot be used as evidence.

Purpose of the Hearsay Rule

An example of hearsay is when a witness provides testimony but only tells what a defendant’s friend said. The witness didn’t directly hear it from the defendant. Instead, a third party claimed a crime was committed or provided specific details.

Hearsay is defined by the Hearsay Rule, which is a set of rules (namely rules 801-807 of Article VIII of the Federal Rules of Evidence). Different states and jurisdictions set their own hearsay rules, often based on federal guidelines. A rule against hearsay prevents someone from testifying who didn’t originally make the statement. It also requires the individual who allegedly did to appear on the stand.

The theory here is that people often make unreliable statements. A person’s memory or perception can have flaws or errors may be made when recalling an event. For this reason, their statements must be analyzed or scrutinized to expose weaknesses and ensure the accuracy of their testimony.

Under the Federal Rules of Evidence, a statement can be considered hearsay by a judge if it is:

But to expose weaknesses in a statement or other issues in court, the following tests are used:

Exceptions to the Hearsay Rule

Defendants in court often face serious accusations and substantial consequences. A jury’s decision shouldn’t be swayed by inaccuracies or even gossip. Cross-examination allows juries to determine whether second-hand statements are biased or dishonest. But that’s not to say hearsay is never admissible in court.

The Hearsay Rule provides for a range of exceptions. Some out-of-court statements are acceptable. One example is if a statement intends to prove something other than its own content. This means it’s recounted but doesn’t prove what was said. The statement could also be vague, with no fact to prove or disprove.

The admission of hearsay may be permitted if a statement originates from business or official records. These are typically reliable sources. Examples include official county files listing individuals licensed to carry a firearm. Also admissible in court are dying declarations, assuming that people are more likely to tell the truth when death is near.

The Hearsay Rule is often used along with the Sixth Amendment’s Confrontation Clause. This protects the right of a defendant to confront a witness who takes the stand against them, especially in trials involving a criminal act. The Hearsay Rule and Confrontation Clause can exclude evidence, and in some cases, it can apply if there’s an exception to a hearsay rule. The defendant must have the opportunity to cross-examine the witness.

The Law Offices of Jacob Emrani represents personal injury clients across California (please see the areas we serve). Familiar with every legal aspect of filing a lawsuit, reaching a settlement, and going to trial (including how to apply the meaning of hearsay), we’re committed to doing what it takes to help clients fight for the financial compensation they deserve. To schedule a free consultation, call 888-952-2952 today.