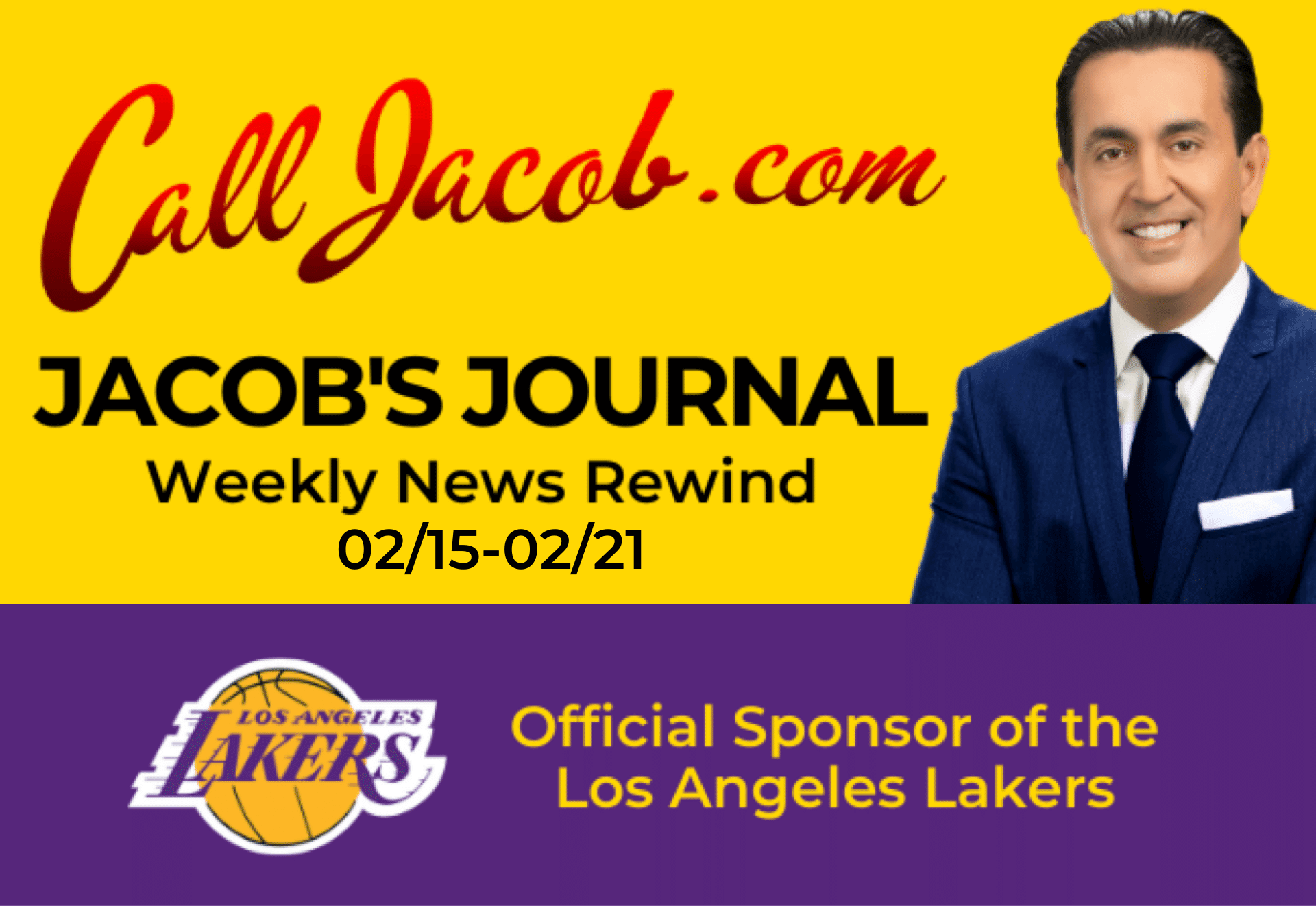 Monday, February 15 (ESPN) – On Monday, an MRI revealed Los Angeles Lakers star Anthony Davis suffered a calf strain and aggravated tendinosis following an injury during Sunday’s game with the Denver Nuggets. The injury occurred when Davis drove on and bumped legs with Nikola Jokic late in the second quarter. Davis remained in the game to take two free throws but left with 2:36 remaining in the quarter. He had been experiencing discomfort for weeks; previous testing revealed a lower right leg injury.

Wednesday, February 17 (CBS Los Angeles) – On Wednesday, the Los Angeles County Department of Public Health reported 2,394 new coronavirus cases and 162 deaths. The number of daily cases has declined by 85% since February 9, according to public health officials, this based on the seven-day average (to an average of 2,230 cases per day). The seven-day average number of deaths is down 91% from January 10. It stood at 91 deaths per day as of February 9. Four additional cases of the COVID-19 variant from the United Kingdom were detected (the total is now 12 in L.A. County). Health officials also said nearly 1,541,000 doses of COVID-19 vaccine have been administered across the county, with 399,642 receiving second doses.

Wednesday, February 17 (Herald-Mail Media) – California Governor Gavin Newsom, along with other state legislators, announced Wednesday a plan to provide a one-time $600 state stimulus payment to low-income residents. The “Golden State stimulus”, intended to help people financially during the pandemic, is part of a larger $9.6 billion economic recovery package. In addition, $2.1 billion in grants have been set aside for small businesses, as well as over $400 million in new federal funds, to go to $525 per child that’s enrolled in a state-subsidized childcare or preschool program. About 5.7 million payments will be provided in all.  The plan also includes a grant proposal and tax relief package.

Wednesday, February 17 (KTLA 5) – The Los Angeles Fire Department reported a two-car collision near West Olympic Boulevard and Overland Avenue Wednesday evening, which resulted in the death of one woman. The woman was pronounced dead at the scene. A teenage boy was driving the other vehicle and was taken to a local hospital with moderate injuries. The LAFD also said a third vehicle, not involved in the collision, stopped at the scene. Officials also said one or more lanes in the area had been closed for a time.

Tuesday, February 16 (MyNewsLA.com) – A vehicular accident near 58th and Flower Streets this week involved a stolen vehicle that was being pursued by Los Angeles police. The suspect crashed the vehicle into a power pole outside a home in the Vermont-Slauson area. There was a minor power outage as a result of the downed power pole. The number of Los Angeles Department of Water and Power customers affected was not known. After the crash, the driver fled but, according to a CBS2 report, was captured near Slauson Avenue.

Molly Steinsapir, 12, Dies After a Devastating Bike Accident Left Her with ‘Brain Trauma’

Wednesday, February 17 (7News.com.au) – Molly Stensapir, 12, died Tuesday following a bike accident in late January that left her with a traumatic brain injury. Her mother Kaye announced the girl’s death on Twitter, where she’d been chronicling her health journey. After the accident, Molly had been rushed to a local ICU, and had been wearing a helmet while riding down a hill in Los Angeles. She is survived by her parents, LA-based lawyers Kaye and Jon Steinsapir, brothers Nate and Eli, cat Leroy, and dog Calvin according to a social media message by Kaye.

Tuesday, February 16 (Patch.com) – While most of L.A. County’s vaccines will go to those who received a first shot (for the second week in a row), health officials announced Tuesday that teachers, law enforcement, and other officials will be eligible for vaccination by March 1. The county plans to open up additional vaccination sites, but a vaccine shortage remains problematic. Officials said expanded eligibility will allow 1.5 million more residents to be vaccinated in March (vaccines will be available to anyone aged 16 or older, with underlying health conditions, starting March 15).

Most vaccines were used for second doses this week. However, health care centers and pharmacies serving hard-hit areas continued to offer first doses, according to a county official. Amid declines in COVID-19 cases and hospitalizations, health officials urged residents to wear face masks and practice social distancing.

Monday, February 15 (Fox 5 San Diego) – A train crash at Chesterfield Drive and San Elijo Avenue near Encinitas killed one pedestrian on Monday, according to the sheriff’s department. The crash forced the closure of Chesterfield Drive between San Elijo Avenue and South Coast Highway 101. The Medical Examiner’s Office was working to identify the victim and notify the family, while the Sheriff’s Transit Enforcement Unit was investigating the incident.