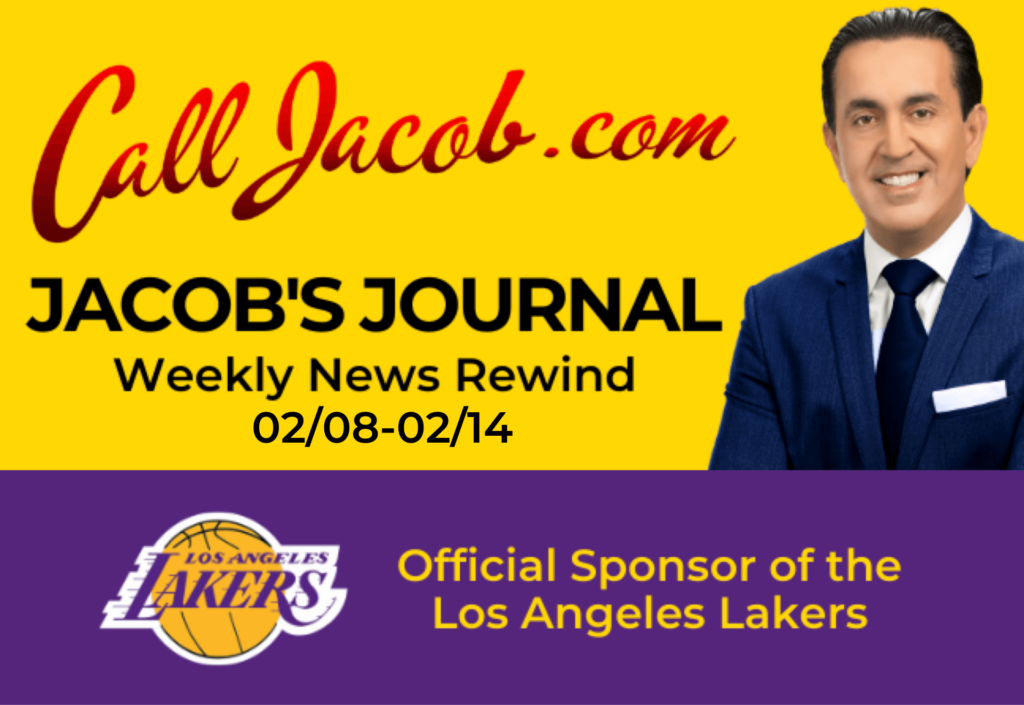 Thursday, February 11 (The New York Times) – Los Angeles Mayor Eric Garcetti announced this week that five coronavirus vaccination sites will be temporarily closed due to concerns over exhausting supplies of the Moderna vaccine. The closures include Dodger Stadium. Closures are expected to start on Friday and Saturday, with plans to reopen Tuesday next week, the mayor said in a news conference Wednesday. While the Centers for Disease Control and Prevention said on Thursday that around 34.7 million people have had at least on dose, about 10% of Californians have receive a vaccine. On Wednesday, the city gave out a record 19,000 shots, but received only 16,000 during the week.

Monday, February 8 (ESPN) – On Monday, The Los Angeles Lakers won 119-112 against the Oklahoma City Thunder in overtime, but without All-Star player Anthony Davis, who is out with right Achilles tendinosis. Alex Caruso was also out with two injured fingers. Davis, 27, underwent medical imaging that revealed the tendon is in good shape, although tightness in his right leg has raised concern. He has missed three games this season but scored 30 points on Saturday, when the Laker’s had a double-overtime win over the Pistons.

Monday, February 8 (KTLA 5) – A box truck driver was arrested on suspicion of DUI following a deadly crash on the 101 Freeway Monday morning. According to the California Highway Patrol, the crash occurred shortly before 2:00 a.m. in Sherman Oaks. An SUV collided with the back of the truck, which was stopped on the freeway near Van Nuys Boulevard. The man, described as between 30 and 40 years old, was pronounced dead at the scene, according to the LAFD. The SUV driver may have been unable to see the truck due to thick fog.

Tuesday, February 9 (ABC 7) – On Monday night, A multi-vehicle crash on the 110 Freeway in Carson killed one person and injured three others (one listed as critical and two with minor injuries). Per a traffic log, the crash occurred on the northbound side of the freeway near the Carson Street exit, at about 8:10 p.m. Aerial footage captured debris on the roadway and traffic backed up for miles. A Sigalert was in effect until about 11:45 p.m.

Board members criticized Island Express Helicopters for a lack of safety review and oversight, while the NTSB found no signs of mechanical failure. Bryant’s widow Vanessa Bryant had previously sued the pilot and helicopter company, which countersued two FAA air traffic controllers for a “series of erroneous acts and/or emissions”. She also sued the Los Angeles County Sheriff’s Department accusing deputies of sharing unauthorized photos of the crash site. And last month legislators proposed a requirement to install a Terrain Avoidance Warning System on similar helicopters, which NTSB investigators said would not have prevented the crash.

Tuesday, February 9 (Los Angeles Daily News) – The LAPD is looking for a hit-and-run driver involved in a crash in Sun Valley that killed Harutiun Moukoian, 58, of Glendale, on Saturday. A suspect that drove the motorist away from the scene in a silver Hyundai Tiburon is also being sought. The accident occurred at the intersection of Coldwater Canyon Avenue and Roscoe Boulevard at about 9:00 a.m. According to police investigators, the driver of a Chevrolet Silverado pickup truck ran a red light and struck a Morris Minor, a British classic car. Police are offering a reward of up to $50,000 for information on the crash; anyone with details can call the Valley Traffic Division at 818-644-8036.

Tuesday, February 9 (KTLA 5) – The California Department of Public Health is investigating whistleblower allegations of mismanagement and incompetence at a PerkinElmer-run lab in Santa Clarita. The allegations against the new COVID-19 testing laboratory include contamination, swapped samples, and inaccurate results, per details obtained by Sacramento’s CBS13. The report also included documents showing unlicensed, improperly trained employees were handling patient specimens. Interviews conducted by the news station claimed lab employees found test swabs in restrooms and technicians dozing off on the job.

PerkinElmer is contracted to process up to 150,000 tests a day. However, records show it is processing fewer than 20,000 tests a day on average. The news station also reported that, in November, the rate of inconclusive tests from the facility was seven times higher than 22 other state labs. Amidst the aforementioned and other complaints, the health department said all those working in the laboratory were qualified, but said some individuals didn’t meet state requirements and were moved to new roles.

Monday, February 8 (CBS Los Angeles) – The number of new, confirmed COVID-19 cases in Los Angeles County continues to decline, with 3,123 new cases (and 89 deaths) reported on Sunday, based on numbers from the Los Angeles County Department of Public Health. However, authorities said reporting delays may be behind this trend. Officials also cited ON On Saturday, Public Health Director Barbara Ferrer said widespread community transmission continues despite the decreases, and raised concern over the risks people took during the Super Bowl. Authorities also said 4,421 people were hospitalized due to coronavirus in L.A. County, including 29% in intensive-care units.