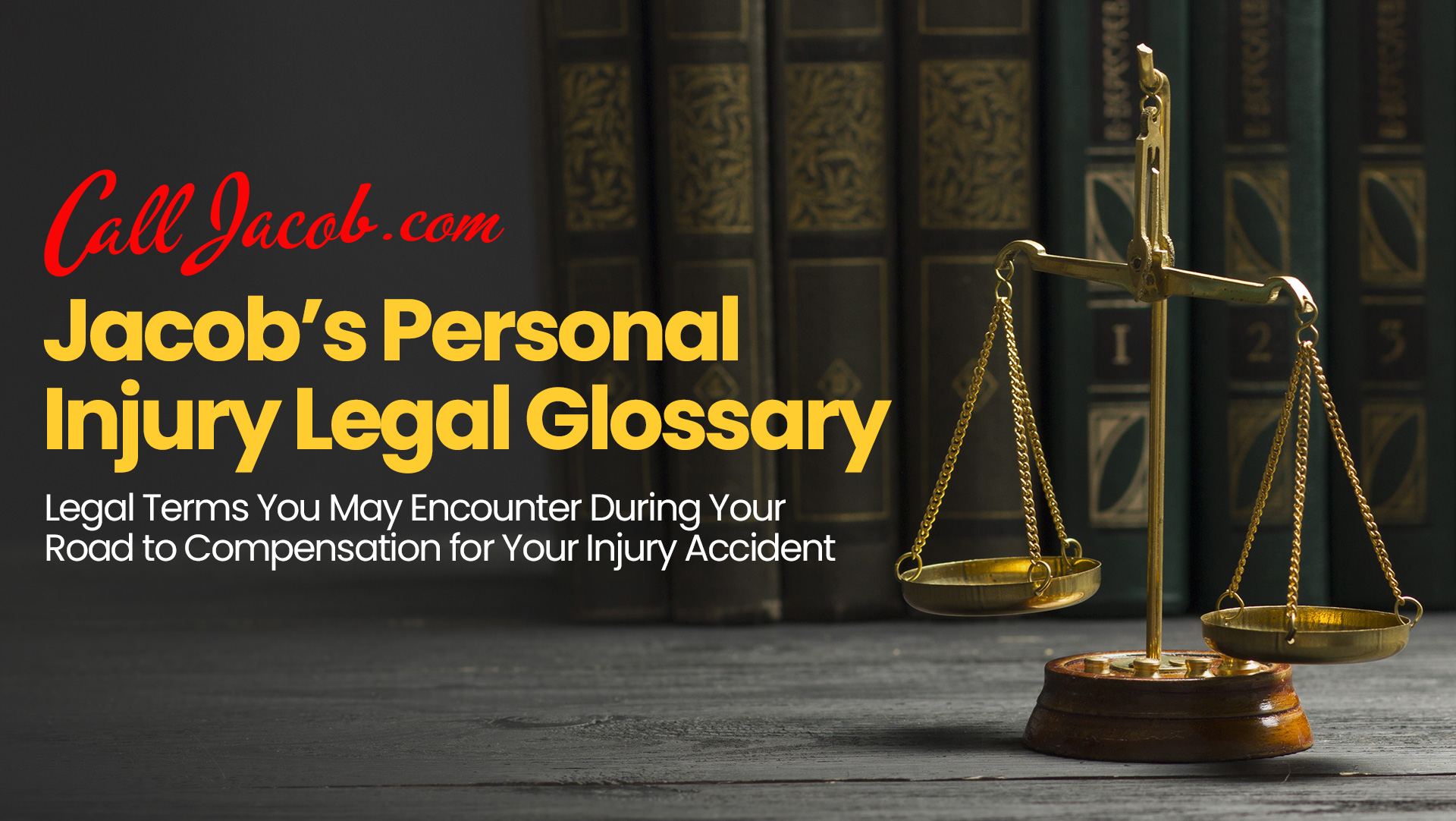 During a personal injury consultation at The Law Offices of Jacob Emrani, a lawsuit, or trial, you’re likely to encounter a number of legal terms. Learning these can help you in your path to obtaining compensation. Whether your case involves a slip and fall or auto accident, here are some words and phrases you are likely to encounter:

In Latin, this refers to the lawsuit’s purpose; if a person is unable to represent themselves (whether they’re underage, or legally incompetent) a guardian “ad litem” is appointed.

The act of resolving a legal case.

The use of strategies such as arbitration and mediation, which are alternatives to using litigation to resolve a dispute.

A person proceeds with an act despite knowing its inherent danger, meaning they cannot seek monetary damages from an individual or entity they claim is responsible.

When a neutral third-party handles a hearing or settlement; both sides enter a contract in which they must accept the arbitrator’s decision as final.

Is filed by an insured person against their insurance company because a claim was unreasonably denied or delayed, or the insurer refused to pay out the full claim.

Financial assistance received from an insurance company, employer, Social Security or other program as compensation for a disability, sickness, or unemployment.

Cuts, bruises, burns, broken bones, nerve damage, poisoning, or any other harm done to a person’s body, whether caused by negligence, an accident, or intentional act such as a crime.

The obligation to prove your claim is truthful, accurate, and factual. As a plaintiff, your burden of proof is to show a driver or other at-fault party was negligent.

The act or process in which something is caused to happen; for example, an injury being directly caused by the defendant’s action or inaction.

A civil legal action that pertains to the plaintiff’s physical or mental harm. Can also refer to a request made to an insurance company for coverage and payment for damages.

A comparison of how the plaintiff contributed to the accident versus the defendant’s degree of negligence. Whether a plaintiff is entitled to any or partial compensation varies by state.

An injury, caused by a work-related injury, that worker’s comp will cover; the term is used to rule out injuries unrelated to the scope of a person’s employment.

The payment a lawyer receives only when the case and settlement is won.

Typically a monetary payment, damages are recovered in a civil case of an injury or loss resulting from another party’s negligence. These include:

A medication that caused harm to a patient; a defective drug claim falls under product liability law, which includes manufacturing defects, design defects, or failure to provide adequate warnings, instructions, or recommendations.

The individual or entity being sued, typically who caused the injury (along with their insurer).

A formal communication to an opposing party, which requests some form of action or response and often threatens legal action.

A recorded question and answer session, held under oath, but outside of court, in which an official written account is created by both parties’ attorneys.

A release of documentation and relevant details requested by the opposing party.

A process that includes interviews, depositions, and requests for documents, records, and a medical exam on the plaintiff to gather important details.

The amount an insurer must pay above the insured’s policy limit, as requested by a judge if it’s found the insurance company acted in bad faith.

An individual with professional, technical, or scientific knowledge qualified to speak with authority on matters related to the case and the plaintiff’s claim.

A wrongful act or mistake that caused injury to another person; can be intentional or a result of negligence, carelessness, ignorance, or unskillfulness that resulted in a breach of duty.

A claim that an individual makes toward their own insurer, rather than the defendant’s insurance company.

Acting with good intent and honesty, promising not to take unfair advantage over someone else or defraud them. When an insurance company covers certain damages if an accident occurs.

When a person recklessly disregards someone’s health or property, thereby exhibiting an intentional failure to perform a duty of care.

A second medical opinion, which is typically requested by the defendant’s legal team or their insurance company, that is required by law. Also called a compulsory medical examination.

Questions an attorney writes for the opposing party to answer under oath. There’s usually a specified time frame to complete the answers, which are reviewed by the plaintiff’s attorney and signed by the client in front of a notary.

The final decision in a court case, in which the lawsuit ends and all contested issues are resolved.

States that insurance coverage cannot be obtained for a loss that previously occurred and the insured knew about.

Sent to a healthcare professional by a personal injury lawyer, allowing the injured person to obtain medical care they cannot afford, with the promise to pay for it out of a settlement or judgement.

A legal obligation to pay monetary damages for one’s acts or omissions.

The maximum amount of money an insurer is obligated to pay related to one loss event.

The process of taking legal action against another party; also includes the steps to filing a lawsuit.

Refers to a monetary value assigned to a specific injury or damage, such as loss of income and the cost of medical bills, future medical care, at-home assistance, or pain and suffering.

Damages that arise out of the death of a loved one, most often a spouse, for loss of companionship, and awarded to a family member.

The negligence or misconduct of a doctor, lawyer, accountant, or other professional, whom has failed to meet a standard of care or standard of conduct. Can include error or an intentional act.

The enforcement of a judgement, sentence, or decree of a court.

When no further improvement in the health of a person is expected, and their condition or injury has stabilized to the point an insurance company won’t continue to pay for treatments.

A non-binding method of resolving a case with the help of a neutral third party.

A set of conditions in which an offense cannot be justified or pardoned for, although the defendant’s degree of fault may be reduced.

A formal request to a judge that they make a ruling or execute some other action; they can either deny or grant this request.

The failure to exercise care that would be considered reasonable given the circumstances of the accident/injury. It includes the duty owned to a plaintiff, a breach of that duty, proximate cause (see below), and the injury and damages the plaintiff suffered.

An agreement the plaintiff and defendant reach, usually before a trial starts, that does not require a court or judge’s approval.

The costs an injured party pays for related to their injuries, before receiving benefits.

A defendant or any person, corporation, or association engaged in a lawsuit.

Also called a complaintant, this is the person or party who files the lawsuit or brings legal action against the defendant.

A document, statement, or request filed with a court; any formal document in which someone makes or responds to claims, allegations, defenses, or denials.

Also called a Demand for Relief, a request by the plaintiff’s attorney to the court requesting specific remedies or damages.

A property owner’s or occupier’s legal responsibility to compensate anyone injured on their premises by, for example, a slip and fall accident.

The amount of evidence needed to prove your claims are more convincing than the evidence the other side presents, and win the case.

Any court appearance or hearing that is part of a lawsuit or legal case.

An event associated with a specific injury that is recognized to be the primary cause.

A comparison of the person’s standard of living before and after the accident/injury. Factors include daily activities, mobility, social relationships/interactions, work-related/recreational activities, future outlook, and general satisfaction.

An exchange of something by both parties as the basis for a contract; means “this for that” in Latin.

An expression of desire, such as to request a physical or mental examination, admission by another party, or documents or physical evidence in a lawsuit.

A negotiated agreement or other conclusion that resolves a legal matter, before or after litigation occurs. Typically occurs before the court hears the case.

A time limit set by law that determines how long a plaintiff has to file a lawsuit after suffering an injury or damage.

A party’s responsibility of wrongdoing regardless of whether they were directly involved in the incident, and often a factor in product liability or defective product cases.

One party in a legal case makes a payment owed by another party and can later collect those funds from whomever originally owed it.

The defendant adds another party to the suit; the claim is brought against another party’s insurance company or, in a workers’ comp case, a manufacturer or other outside party.

A non-criminal wrongdoing which someone is legally liable for.

The final decision in a case made by a judge or jury.

An employer’s insurance that covers economic losses employees and/or their families incur due to job-related injuries or illnesses.

A lawsuit filed by a surviving family member, or other financially dependent, for the death of a person due to negligence or wrongful behavior.

The Law Offices of Jacob Emrani can help recover the compensation you deserved if you or a loved one has been injured in an accident. Call 888-952-2952 to schedule your free consultation.