Need-to-Know Rules for Biking on the Road 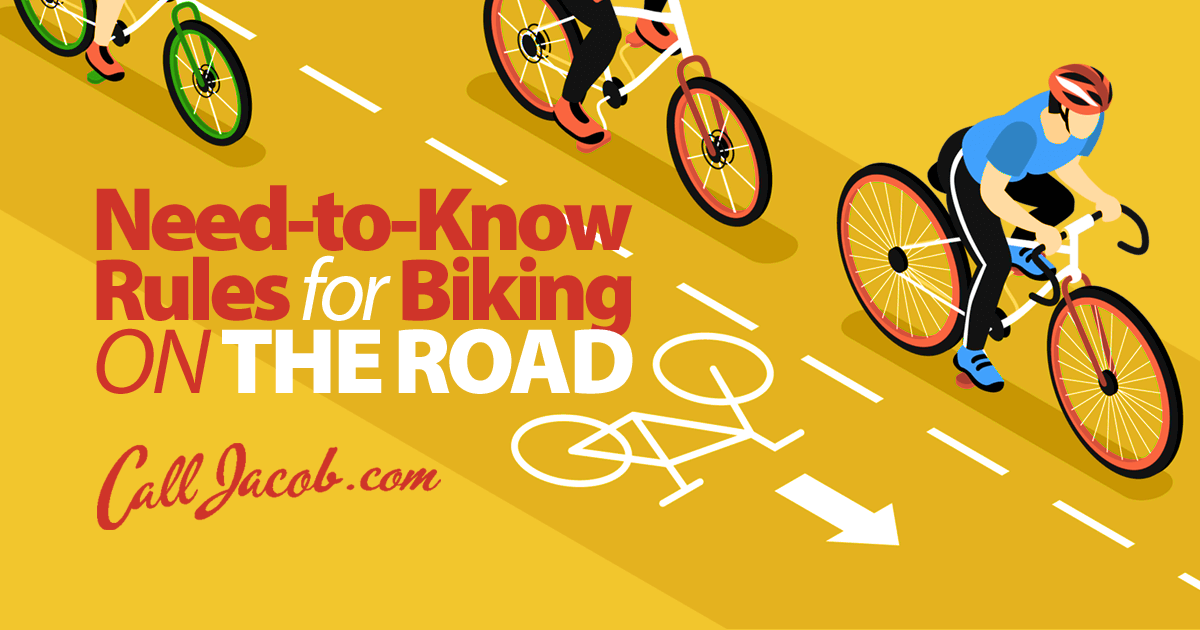 According to the California Department of Motor Vehicles, more than 10,000 bicyclists are injured in collisions every year, and over 100 are killed. Accidents are often caused by a lack of attention, skill, or control over behavior. When it comes to the rules of the road, bicycle riders must follow the same principles and safe practices as motorists.

Specific California cycling laws prohibit riders from operating a bicycle while under the influence of alcohol or drugs. If over 13 but under 21 years old, a bicyclist convicted of riding under the influence can have their driving privileges suspended or delayed for 1 year.

Rules for Sharing the Road

If you’re biking on California roads, you must:

Rules for Equipping a Bike

State law requires a bicycle to be equipped with a brake that enables a “one-braked-wheel skid on dry, level, clean pavement”. Handlebars must be positioned below the rider’s shoulders, while the bicycle must be sized such that the rider can stop, support it, and start moving safely with just one foot on the ground.

Hand signals show motorists your intentions before making a move. With one hand on the handlebars to maintain control, use the other arm to provide a clear signal. If turning left, look behind over your left shoulder, and then fully extend your left arm. Before a right turn, hold your left arm up with your elbow bent. Place your left arm in a downward position to communicate that you’re going to slow down or stop.

Always Ride in the Same Direction as Traffic

This ensures you are visible to drivers who are changing lanes or entering roads. Riding in the same direction also lets them see you when passing, preparing to make a left turn, or avoiding a hazard. It also improves safety when riding in a narrow lane, when approaching a right turn, or the road is one-way with two or more lanes (in which case you can ride near the left curb or the edge of the roadway).

Use any designated bicycle lane if one is available. But be aware that motorists must merge into a bicycle lane to turn right. A solid white line usually marks a bicycle lane and becomes a dotted line before the corner. If the bicycle lane is painted a bright green, treat it as any other bicycle lane. This is just to increase visibility.

If making a left turn, never do so from the right side of the road, even if in a bicycle lane. As you approach an intersection, look over your left shoulder. If there’s no oncoming traffic, signal the turn and move to the left/center turn lane (or the left side of a lane). Center the bike so turning vehicles cannot pass you and, before turning, yield to oncoming vehicles.

What If I Get Stopped and Ticketed?

You can be found partially or totally at fault for a collision if you were rolling through a stop sign or traffic light at the time, or otherwise not obeying the bicycle rules of the road. Being partially at fault means you will have to pay your share of the damages. If negligent and wholly at fault, you’ll be liable for all the damages that resulted. Consult with an attorney as soon as possible to minimize the potential legal and financial consequences of a collision.

If you’ve been in a bike accident, our Los Angeles bicycle accident attorney can uphold your legal right to financial compensation. An impact at any speed can be serious and life-threatening, and bicycles are particularly vulnerable at intersections. Bicyclists and motorists are seen as the same under the law, and city ordinances regarding bike use on sidewalks vary, so you need an experienced lawyer to build your case. Our attorney can help recover damages including medical bills, prescription medication costs, property damage, lost pay, and emotional trauma.

To schedule your free bicycle accident case consultation, contact us today at 888-952-2952.