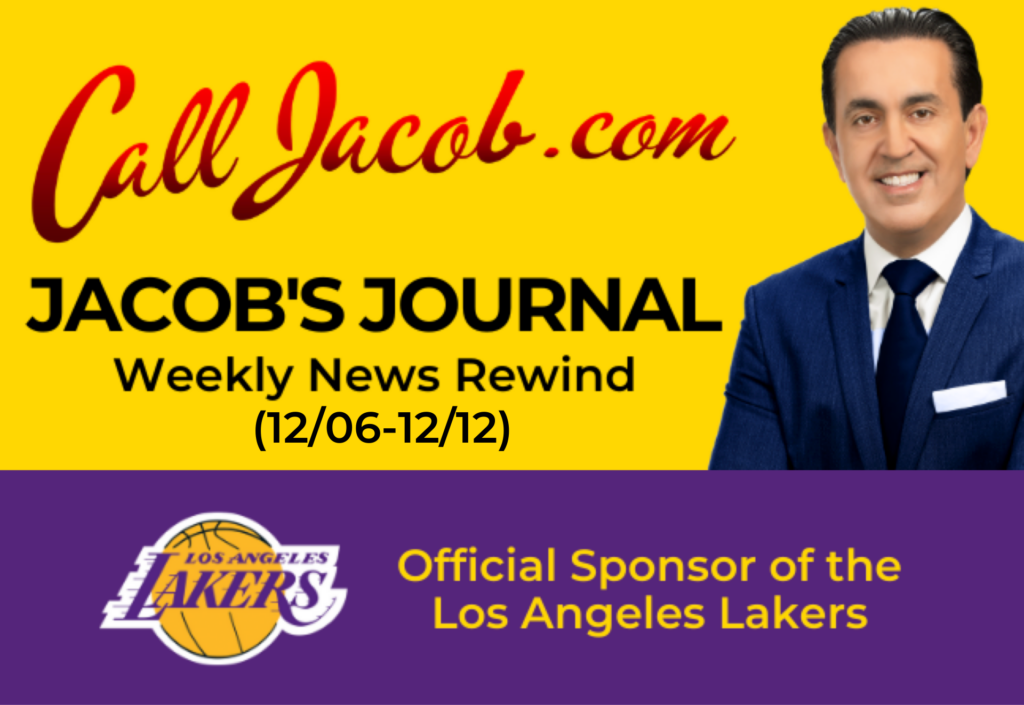 Thursday, December 9 (Los Angeles Times) – In the wake of Thanksgiving gatherings, health officials in numerous California counties are reporting a rebound in coronavirus cases. Many are concerned of a fifth COVID-19 surge this winter. New infections have risen more than 30% (and 33% in Los Angeles County) while the number of Californian’s hospitalized has climbed by 21% since November 22. The highly infectious Delta variant accounts for most cases statewide amidst the appearance of the heavily mutated Omicron variant.

The U.S. Centers for Disease Control and Prevention has put Los Angeles County back into the red tier for coronavirus transmission. Substantial increases in weekly case rates have been reported in Santa Clara, San Diego, Ventura, Alameda, and Marin Counties. And for the week ending November 23, 5,000 new cases a day on average were reported, while 6,600 per day on average were reported for the week ending Tuesday.

A 9% increase in people hospitalized with COVID-19 was reported on Wednesday compared to numbers released two weeks ago. Health officials also noted that the Delta variant has eroded the vaccine’s ability to stop the virus from spreading, although it still wards off severe illness. The highest full vaccination rates are in the San Francisco Bay Area, including 81% in Marin County, compared to 66% in L.A. County. By comparison, only 56% of residents are fully vaccinated in Fresno County.

Despite a high level of transmission, California now has the ninth-lowest weekly coronavirus rate in the U.S. The nation’s first confirmed Omicron case was reported in San Francisco on December 1. Preliminary indications are that, while more infectious, Omicron may not lead to as severe an illness.

Officials have suggested the same measures to protect against Omicron as other variants. There’s also been an increase in demand for booster shots, especially following an initial lab study by Pfizer and BioNTech suggesting three doses of their vaccine are more effective at protecting against Omicron.

Sunday, December 5 (KTLA 5) – The California Highway Patrol reported a woman was killed in a five-car collision on the 215 Freeway in Riverside on Sunday. The incident occurred at about 6:30 a.m. when a pickup truck suffered a flat tire; it slowed down along with two cars in the southbound lanes. A fourth car, a Honda Civic, was being driven by the woman, whose identity has not yet been released. According to the CHP report, she did not slow or stop, struck the three cars ahead, and was rear ended by a fifth car, succumbing to her injuries later at Riverside Community Hospital. Two other drivers suffered minor injuries (one was hospitalized), and the driver of a Toyota Corolla struck from behind by the Civic was arrested on suspicion of DUI.

Friday, December 10 (ESPN.com) – The Los Angeles Lakers suffered a 109-95 loss to the Memphis Grizzlies on Thursday, despite an early lead. Anthony Davis said the team is currently far from being a championship contender, saying of the Grizzlies, “These guys already feel like they’re the underdogs when they’re coming in..” also referring to how the team is missing star players like Ja Morant and Dillon Brooks. Davis also said, “And we got to play like we’re the underdogs” adding that, given their recent performance, “we probably are.”

In Thursday’s game, L.A. had a nine-point lead in the first quarter, but the Grizzlies led 59-53 by the half. LeBron James scored his 100th career triple-double and had five turnovers. Russell Westbrook had six turnovers. Davis expressed additional disappointment in the game, which dropped the Lakers to 13-13 to take the No. 7 spot in the Western Conference.