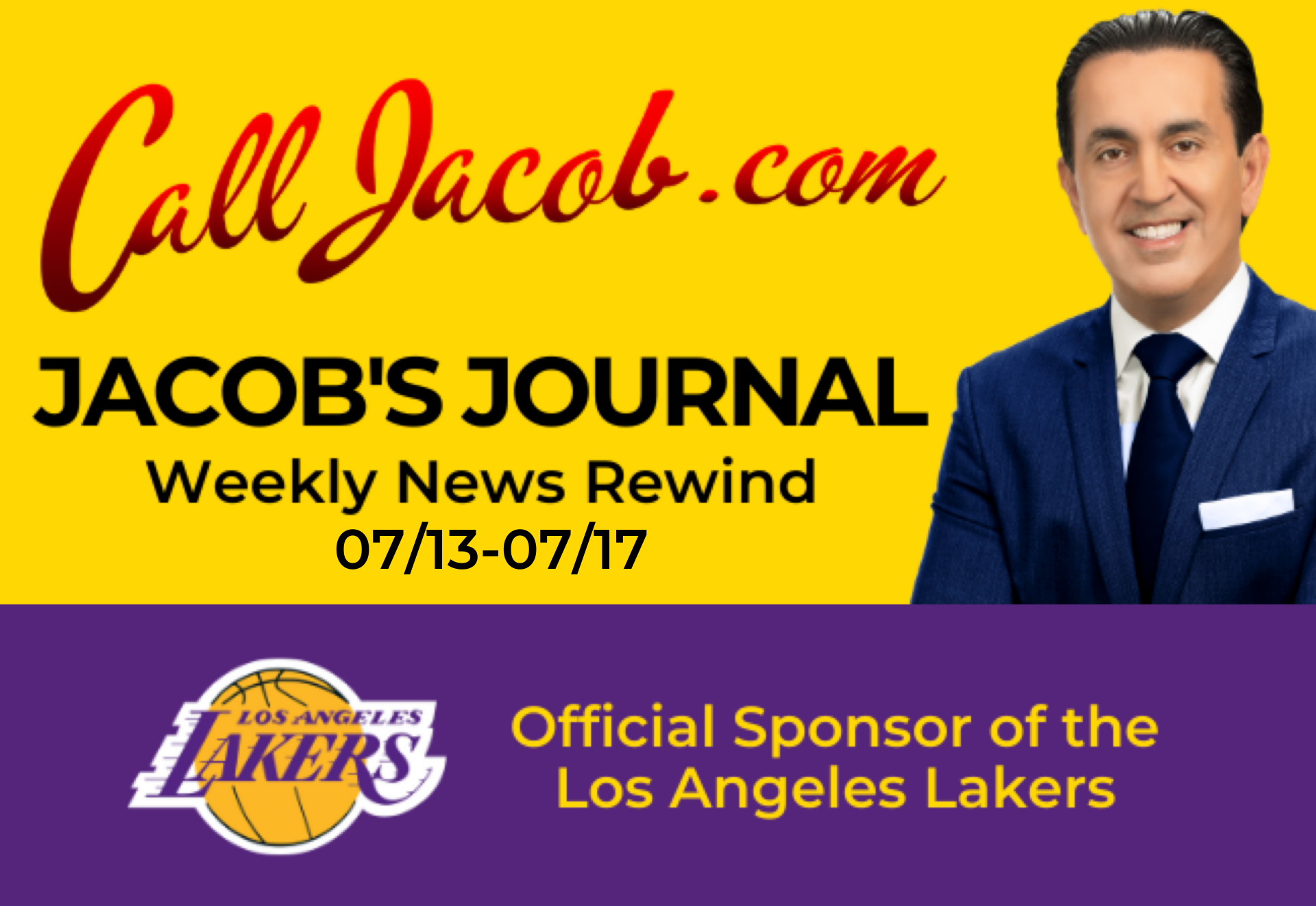 Tuesday, July 14 (CBS Los Angeles) – On Tuesday, the Los Angeles County Department of Public Health reported 4,244 new cases of coronavirus (for a total of 140,307) and 2,103 hospitalizations. Of these, 27% were in intensive care and 19% were on ventilators. The county public health director blamed the numbers on people not adhering to public health recommendations. In addition, officials reported 73 new deaths. A number of local school districts said in-person classes won’t be offered this fall and, just one day before, Governor Gavin Newsom ordered numerous businesses to close again.

Thursday, July 16 (KTLA) – The LAPD said a burglary suspect was taken into custody following a pursuit in North Hollywood on Thursday. During the pursuit, a white pickup truck sped through neighborhoods, ran red lights, and narrowly missed several vehicles. Officers deployed spike strips to stop the truck, but the driver swerved to miss them. After the truck came to a stop near Vineland Avenue and Weddington Street before 8:00 a.m., the driver remained inside but, based on aerial footage, was detained by officers upon exiting the vehicle a half an hour later. The chase began after the LAPD received reports of a burglary in Studio City.

Monday, July 13 (CBS Los Angeles) – Los Angeles Apparel was ordered to stay closed last Friday after four workers were killed and 300 others infected by coronavirus, according to public health officials. The garment manufacturer had previously opened to make face masks. Last Friday, renewed statewide closures were issued for restaurants, bars, museums, and other indoor gathering spaces. Inspectors found cardboard used as a barrier between workers, and other violations, at the plant, and contend owner Dov Charney violated the original closure order by reopening the facility with new workers.

Two Suspects Arrested For Arson and Looting During Recent Protests

Thursday, July 16 (NBC Los Angeles) – Mario Alvarado, 43, and Julian Mejia, 34, were taken into custody by the multi-agency SAFE LA Task Force on Thursday, the LAPD said. Since the May 30 crime, police had been circulating security images of the suspects. An LAPD statement said one suspect used an accelerant to ignite a fire and both looted alcohol and other items from area businesses. The arrests follow an investigation during which authorities received tips from the Task Force website, www.lapdonline.org/safelatips.

Thursday, July 16 (NBC News) – On Wednesday, the Berkeley City Council approved a police reform proposal that would replace police with unarmed civilians during traffic stops. Police would also not respond to calls involving people experiencing homelessness or mental illness. The City Council voted to allow a public committee to hash out additional details, including creating a separate department to manage transportation planning and enforce parking and traffic laws. It also voted for the committee to find ways to cut the police department’s budget in half. Opponents of the plan rebuked the idea as dangerous and expressed concern over safety during traffic stops.

Wednesday, July 15 (CBS Los Angeles) – Melissa Mendoza, 30, of Santa Clarita, is accused of DUI after allegedly driving drunk with two young children in her SUV. She is also facing felony child endangerment charges. According to the Los Angeles County Sheriff’s Department, a witness saw the woman appear to fall asleep at a stoplight Tuesday morning. Deputies on scene said an infant was on the woman’s lap and a 5-year-old girl was in the backseat without a seatbelt. Breath alcohol tests showed the woman was at three times the legal driving limit; she is currently being held on $200,000 bail.

Monday, July 13 (KTLA5) – On Monday, Governor Gavin Newsom required 30 counties to close indoor activities. The order, which covers all of Southern California, includes fitness centers, hair salon, /barbershops, indoor malls, places of worship, and other businesses. In addition, Newsom ordered all 58 counties to cease indoor operations at restaurants, bars, movie theaters, wineries, museums, zoos, card rooms, and family entertaining centers. Coronavirus cases are surging statewide, and positivity rates are up to 7.4%. The governor also said the state will continue to work on mitigating the spread of the virus until residents adapt to new behaviors and there is a COVID-19 vaccine or effective treatment.

With Traffic Deaths on the Rise, San Jose Renews Focus on Safety

Wednesday, July 15 (San Jose Spotlight) – San Jose is focusing on outreach after 60 traffic fatalities were reported for 2019, the same as in 2015 when it became a Vision Zero city. Vision Zero data show that traffic incidents are not evenly distributed throughout the city and occur in “priority corridors”; a proposed solution suggests using data to allocate limited resources to these areas. Vision Zero data also show a spike in pedestrian deaths and rise in the median age of bicycle fatalities in 2019, driving the push for outreach to adults, a program manager at the San Jose Department of Transportation said. The city is also drafting the Better Bike Plan 2025 to build/improve bike lanes and increase the use of bicycles.