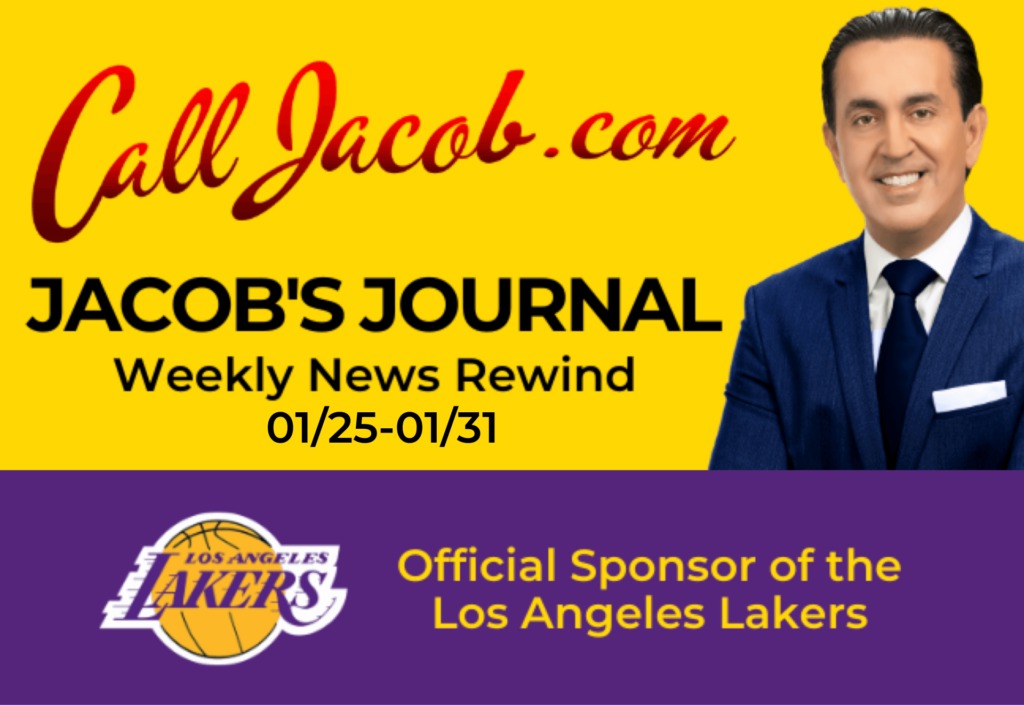 Thursday, January 28 (Yahoo! Sports) – On Tuesday, basketball fans gathered in Los Angeles to remember Kobe Bryant on the one-year anniversary of the NBA superstar’s death in a helicopter crash, along with his daughter, Gianna, and seven other people on board. Fans laid flowers and Los Angeles Lakers memorabilia outside the Staples Center. Bryant’s widow Vanessa published a letter from her daughter’s friend on Instagram to honor them, while former team-mate Pau Gasol, Lakers legend Earvin “Magic” Johnson, and various Los Angeles sporting franchises paid tribute as well. The results of the investigation into the deadly helicopter crash on January 26, 2020 are set to be announced by the National Transportation Safety Board on February 9.

Wednesday, January 27 (CBS Los Angeles) – A 21-year-old woman was killed in a four-car pileup Wednesday in Fullerton. Briefly trapped in a white Toyota Corolla and freed from the wreck, the driver was later pronounced dead at a local hospital. An 18-year-old passenger was in the car as well. The crash occurred at about 10:00 a.m. near Magnolia Avenue and Valencia Drive, according to Fullerton police. Police say a black Chevrolet Silverado was driving erratically on Magnolia and veered into oncoming traffic, causing the crash that also left two men in critical condition; investigators are determining whether alcohol or drugs were a factor. Anyone with information can call 714-738-6815.

Wednesday, January 27 (The Orange County Register) – After a truck veered into oncoming traffic and collided with a sedan in Fullerton on Wednesday, a 21-year-old woman died and three others were badly injured. The wreck left a passenger of the vehicle struck, a Toyota Corolla, a 36-year-old man driving the Chevrolet Silverado truck, and a 50-year-old man driving a Ford Edge hospitalized. The truck was moving erratically, according to investigators, when it traveled into southbound lanes on Magnolia Avenue, near Valencia Drive. After colliding head-on with the Corolla, it flipped over and struck a Ford Edge, while the Corolla spun out and struck a Nissan Altima. Anyone with information can call the FPD at 714-738-6815 or Crime Stoppers at 855-847-6227.

Homeowners Beware: Slip and Fall Scams Are On The Rise

Wednesday, January 27 (Forbes Advisor) – According to the National Floor Safety Institute, there are 1 million trips to emergency rooms due to flip and fall accidents. But as Forbes Advisor editor Jason Metz explains, fake injury claims filed by fraudsters seem to be on the rise. Questionable slip and fall claims against homeowners rose 39% from 2017 to 2019. The National Insurance Crime Bureau (NICB), which says such scams aren’t new, warns of fraud tactics such as using props (toys, garden hoses, glass, etc.), overly enthusiastic witnesses, and an injured person who threatens legal action and seems too familiar with insurance terms/procedures. Metz suggests cooperating with claims adjusters and reporting suspicious activity to an insurance company’s investigative unit or the NICB.

Monday, January 25 (Times of San Diego) – A big rig struck a minivan on Interstate 805 in National City shortly after 4:50 a.m. Monday morning. The crash occurred north of Plaza Boulevard on the northbound side of the highway, spilling fuel. According to the California Highway Patrol, the truck hydroplaned and stuck the center divide before the collision, causing it to jackknife. The trailer blocked the right two lanes of the highway, while a hazmat crew cleaned up the fuel spill. No injuries were reported.

San Diego County Back in Purple Tier, Allowing Some Businesses to Reopen Outdoors

However, restrictions prevent bars/breweries/distilleries that don’t serve food from opening and live audience sports venues and amusement parks are still closed. To move into the less restrictive Red tier, positive cases would have to go below 7.0%. As of this announcement, it was 49.6%.

Monday, January 25 (La Jolla Light) – On Monday, California officials lifted regional coronavirus stay-at-home orders statewide. This could allow restaurants in many counties to reopen outdoor dining, while hair and nail salons may be able to resume limited indoor service. The move restores the colored tier system that assigns risk levels to counties based on coronavirus infection rates. Changes take effect immediately and could lesson restrictions in Southern California. In a statement, California Health and Human Services Secretary Dr. Mark Ghaly expressed optimism following the most recent surge in the pandemic, which has been the most dangerous yet.

Wondering When Its Your Turn to Get The COVID Vaccine? CA Launches Notification Website in LA, SD Counties

Monday, January 25 (ABC 7) – California has launched a new pilot website, My Turn, that lets users schedule vaccination appointments and find out when it’s their turn to receive the COVID-19 vaccine. Those who register can be notified about eligibility via text or email. The system is currently available in Los Angeles and San Diego Counties for health care workers and people aged 65 and older. Governor Gavin Newsom says the tool lets providers share data automatically with the state and federal government. Officials are currently planning to make the system available statewide in early February.