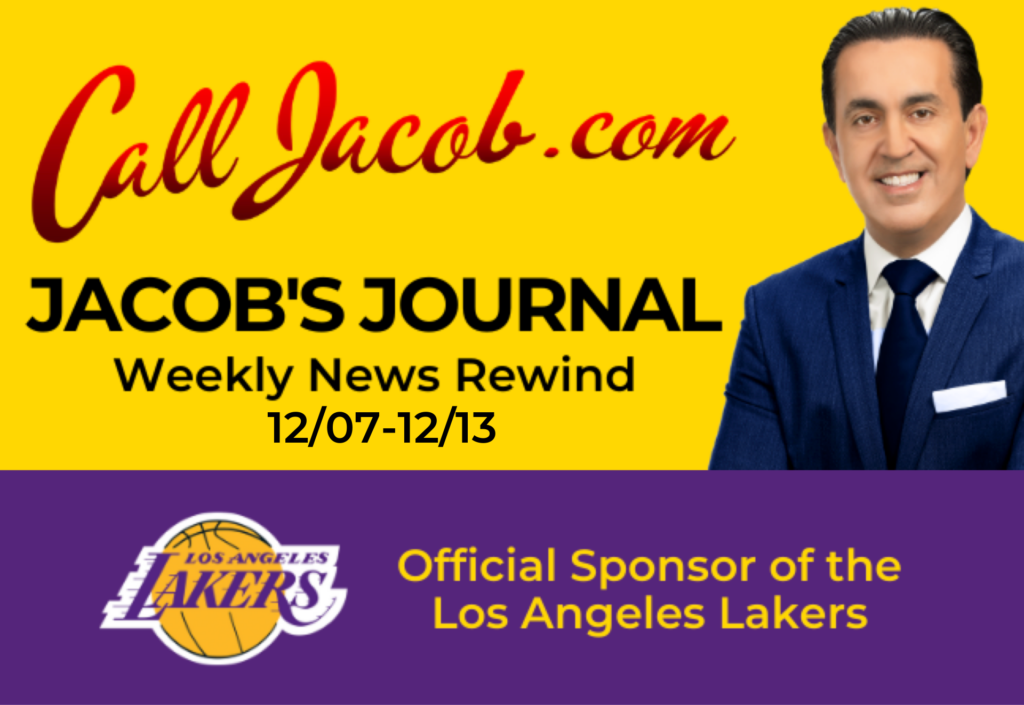 Thursday, December 10 (KTLA 5) – A record-setting 12,819 new COVID-19 cases were reported Thursday in Los Angeles County, as were 74 new deaths, including the first virus-related death of a child. The staggering count follows the previous record high on Sunday of 10,528. Countywide, the total number of positive cases rose to 487,917. In a statement, county Public Health Director Barbara Ferrer said it’s the “most dangerous time for L.A. County” as officials report more cases than at any point during the pandemic.

The county is also experiencing a high hospitalization rate while a new state-mandated stay-at-home order was issued this week. Also on Thursday, large-scale use of Pfizer’s vaccine was endorsed by a U.S. government advisory panel; the county could receive about 83,000 doses by the weekend if the Food and Drug Administration (FDA) clears its use.

Driver Surrenders in Sylmar After Leading Authorities on High-Speed Pursuit

Wednesday, December 9 (KTLA 5) – Following a high-speed pursuit in the San Fernando Valley, the driver of a silver sedan surrendered to authorities. The California Highway Patrol reported the driver was wanted for speeding. Aerial footage showed the vehicle moving northbound on the 405 Freeway near Granada Hills. The driver fled after police attempted a maneuver to stop the car, after which the bumper appeared to be hanging as it continued on surface streets for several miles. At around 11:09 p.m., the vehicle entered a parking lot in Sylmar and the driver surrendered.

Wednesday, December 9 (CBS Los Angeles) – Henry Eduardo Saldana-Mejia, 27, and his wife, Gabriela Andrade, 29, were killed in a DUI crash in Newport Beach on Wednesday, said police. The crash happened on Newport Coast Drive at about 7:45 p.m. and also injured their three children, ages 1, 3, and 5. All three were hospitalized in critical condition. The second car involved in the crash, a Range Rover, was driven by Grace Elizabeth Coleman, 22, who fled the scene on foot but was taken into custody nearby. According to Newport Beach Police, Coleman has a prior DUI conviction and was booked on suspicion of murder, DUI causing bodily injury, and hit-and-run resulting in death.

Monday, December 7 (KTLA 5) – A hit-and-run crash involving a van resulted in the death of a motorcyclist Monday morning in Echo Park, according to police. At about 6:35 a.m., the LAPD said, the driver of the van made an illegal U-turn on Glendale Boulevard south of Reservoir Street. The victim, a 29-year-old male, was taken to the hospital in critical condition but died shortly after. While police have no description of the driver, the van is said to be a maroon or red, late 1990s/early 2000s Chevy Astro. Police are offering a reward of up to $50,000 to anyone who can provide information leading to the driver’s identification, arrest, and conviction; anyone with details can call 213-486-0761, 213-833-3713, or 213-833-3746.

Tuesday, December 8 (NBC Los Angeles) – On Tuesday, a convicted bank robber was charged with second-degree murder in connection with a DUI collision in Cost Mesa that killed Noel Bascon, 12, while he rode alongside his father on a bicycle. Richard David Lavalle of Long Beach was being held without bail following the collision. The crash happened just before 6:00 p.m. Sunday at Junipero Drive and Arlington Drive, police said. Lavalle’s pickup truck went through a stop sign before hitting the boy, after which a passersby attempted CPR and officers continued life-saving measures.

The driver was arrested at the scene while passenger Lee Anna Diaz Murphy, 56, was booked on suspicion of possession of controlled substances and unlawful drug paraphernalia, police said. Lavalle has a previous DUI conviction in 2013 and was convicted of armed bank robbery in 2009 and sentenced to 35 months in federal prison. He was also convicted of robbery in Los Angeles County in 2018.

Tuesday, December 8 (KTLA 5) – Police are seeking the public’s help in finding a hit-and-run driver who fatally struck a male pedestrian in Koreatown on September 27. The victim, Destin Moore, 24, was found by officers in an alley near the intersection of Vermont Avenue and Council Street, the LAPD said, and taken to a nearby hospital where he was pronounced dead. Los Angeles County coroner’s officials said Moore’s injuries were consistent with a vehicle strike. Investigators are also searching for two vehicles of interest based on surveillance video. Anyone with information can call the LAPD at 213-473-0236 or Crime Stoppers at 800-222-8477.

Wednesday, December 9 (CBS Los Angeles) – An INRIX study released Wednesday found a 21% decrease in vehicular collisions in the Los Angeles area during the coronavirus pandemic. On the most collision-prone highway in the area, Interstate 10, the study found a 25% decrease in crashes since last year. It also ranked Los Angeles as having the 19th largest reduction in crashes during the pandemic, in an analysis of the top 25 U.S. metro areas. The largest decrease, of 38%, was noted in New York City. Boston, Dallas, Phoenix, Detroit, Sacramento, Seattle, Minneapolis, and San Diego were also in the top 10.

Thursday, December 10 (CBS Los Angeles) – Time Magazine has named Los Angeles Lakers forward LeBron James as Athlete of the Year. James, 35, led the Lakers to their first NBA title since 2010 in October, but he is also being honored for his activism off the court. James spoke out after the killings of George Floyd and Breonna Taylor and has been vocal about issues such as racial justice and police brutality. He also launched the nonprofit group, More Than a Vote, in June to fight Black voter suppression.