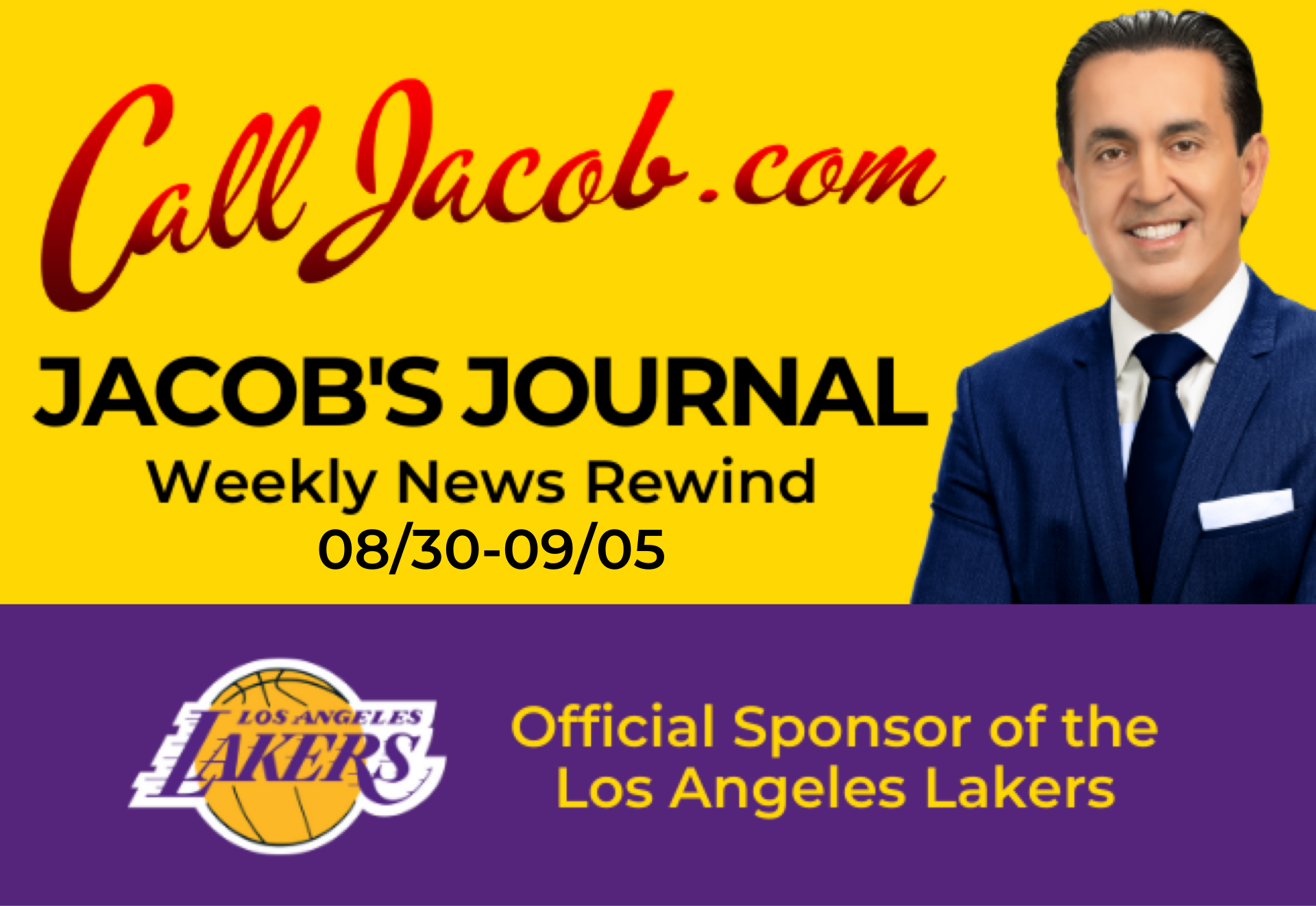 Also, 1,207 new coronavirus cases were reported in the county over a 24-hour period. The total now stands at 336,053, with a case rate of 35 per 100,000 residents on Tuesday and positivity rate of 10.6%. There have been 4,719 COVID deaths in the county and 62.4% of the eligible population is partially or fully vaccinated. In addition, KESQ provided updates on vaccination status by group, cases in each city, and noted that booster shots are available for the immunocompromised at Riverside County mobile clinics.

Tuesday, August 31 (Los Angeles Daily News) – According to the Los Angeles County District Attorney’s Office, three men accused of staging 15 accidents to defraud insurance companies were charged this week. Charges were filed against Eduardo Retana, 25, Ausencio Gomez, 46, and Victor Valle-Diaz, 55; all were accused of defrauding insurance companies of nearly $330,000. The accidents, which took place on the 405, 101, 5, 605, and 91 freeways, left 21 people injured, according to Alex Karkanen of the District Attorney’s Automobile Insurance Fraud Division. One victim had burn injuries and another man suffered a crushed leg; another staged accident left a man with severe back injuries. Most occurred in Los Angeles and one crash happened in Orange County, between January and September 2020. In each case, the driver would cut in front of another vehicle, hit the brakes, and cause a crash.

New Rent Relief Is on the Way for L.A. Tenants and Landlords. Here’s How to Apply

Tuesday, August 31 (Los Angeles Times) – California’s moratorium on evictions starts to expire on October 1. Residents who have fallen behind on rent could be removed by landlords. To avoid eviction, tenants must either pay new rent in full and cover at least 25% of what they haven’t paid since September 2020, or enroll in a state or local government issued rental assistance program. Los Angeles is launching the Housing Is Key emergency rental assistance program, which covers 100% of back rent, and three months of future payments, for eligible applicants.

The program is being funded by the $5.2 billion allocated by the federal government for COVID-related rental assistance. Participating landlords will receive rent payments directly from the state, and tenants will receive aid if their landlord doesn’t participate. Also covered are up to 12 months of unpaid utility bills dating to April 2020; the money will go directly to participating utility companies.

Relief is available to those who rent homes, apartment units, or mobile homes and have suffered a COVID-19 related financial hardship and don’t earn more than 80% of the area median income (In Los Angeles County, that applies to tenants earning less than $66,250 for an individual and $94,600 for a family of four). Qualifying noncitizens are eligible for the program. To apply, tenants must fill out an online form and submit the required paperwork. The state has been streamlining its application process for aid, which will be available until funding runs out. Contact the Housing Is Key hotline at (833) 687-0967 for more information.

Fresno Church Fought Against California’s COVID Rules. Now the State Has to Pay

Wednesday, September 1 (The Fresno Bee) – Cornerstone Church was awarded $400,000 in legal fees for its fight against the state during the COVID-19 pandemic. The pastor of the downtown Fresno church announced the news on Wednesday. According to the church’s law firm, it filed a lawsuit against the state of California along with Cross Culture Christian Center in Lodi, to which Joaquin County officials agreed to pay $100,000. In February, the U.S. Supreme Court overturned the state’s prohibition on indoor church services, and the state agreed in June to pay $2.15 million in attorney’s fees for two lawsuits (the other filed by South Bay United Pentecostal Church in San Diego). Cornerstone has continued to hold services since May 21, 2020; one congregant, who contracted COVID-19 outside the church, died from the virus. Reverend Jim Franklin said he was unaware of anyone who contracted the virus there, and that its Wilson Theatre is cleaned regularly with hydrogen peroxide.

(California News Times) – Personal injury lawyers across Los Angeles have put up eye-catching signs, including along Wilshire Boulevard. It was illegal for lawyers to advertise until 1977, when the U.S. Supreme Court decided lawyers had the same advertising rights as other businesses. The decision followed several tests, including the opening of a personal injury company at the Van Nuys Strip Mall in the early 1970s, and a proceeding filed by Jacoby and Myers in the California Supreme Court, which ruled that preventing lawyers from promoting themselves in interviews was a violation of First Amendment rights. The famous law firm soon introduced its first television commercial, offering a consultation for just $20. Since then, ads have appeared by personal injury lawyer Ardy Pirnia, and local celebrity attorney Jacob Emrani (personal injury lawyer for the L.A. Lakers). While websites and social media have been good for business, Pirnia said that billboards are more efficient than outsourcing to marketing companies. Local law professor Adam Winkler said that, while many see the ads as roadside distractions, they help the public see lawyers and law firms as more positive and accessible.

Wednesday, September 1 (ESPN.com) – NBA insiders have pegged the Brooklyn Nets as betting favorites to win the 2021-22 NBA title, with Kevin Durant, James Harden, and Kyrie Irving forming a powerful trio. The Nets put up 116.3 points per 100 possessions, the most efficient offense in league history, last year. The Los Angeles Lakers, with LeBron James, Anthony Davis, Carmelo Anthony, and Russell Westbrook, are favored to reach the Finals as well. Other contenders include the 2021 Finalists—the Milwaukee Bucks and Phoenix Suns—while there’s also speculation around the Golden State Warriors, Sacramento Kings, Utah Jazz, and Philadelphia 76ers.

Wednesday, September 1 (iMore) – Two of Apple’s self-driving cars were in minor accidents this month, according to MacRumors. The incidents occurred within a week of each other. According to the California DMV, the first occurred in San Diego on August 19 and involved a Lexus RX 450h that was hit by a Hyundai while stopped in traffic. No injuries resulted from the impact. The second accident happened on August 23 in Cupertino near the Apple Park campus. The vehicle was in manual mode when it was rear ended by a Subaru Outback, also while stopped in traffic. Both accidents were minor and not the fault of the self-driving cars. Apple has recently increased the number of drivers for its fleet by 20%; the company is rumored to be releasing an electric car as early as 2025.

1 Dead, 5 Injured Including Children in Wrong-Way Crash on 101 Freeway in Encino

Friday, August 13 (KTLA 5) – On Thursday, August 12, an SUV traveling in the wrong direction struck a big rig on the 101 Freeway, near the 405 Freeway in Encino. One adult woman was killed and five injured, including children. The driver of the SUV was arrested at the scene after fighting with responding officers, who used a Taser to detain the fleeing individual, said the California Highway Patrol. The 2003 Lincoln Navigator hit the truck at about 7:00 p.m. when it was traveling northbound in southbound lanes. The truck driver declined medical transport.

Later identified by the CHP as Cesar Iban Torres, 31, of Los Angeles, the SUV driver was taken into custody, treated at a local hospital, and is being held at the Twin Towers Correctional Facility in lieu of $1 million bail, jail records show. The children were hospitalized as a precaution and, on Friday, family members identified the deceased victim as 26-year-old Aimee García, a mother of four. A GoFundMe page created for funeral expenses states she was a victim of domestic violence and was killed due to an intentional act to drive the wrong way.

Thursday, September 2 (Bleacher Report) – The Los Angeles Lakers are set for full steam ahead in the 2021-22 NBA season. Returning only four players from last season, the team can go as far as LeBron James and Anthony Davis can take them. But all the adjustments are making it tricky to forecast predictions. Bleacher Report writer Zach Buckley made three bold predictions, including that Dwight Howard, 36, will play more games than Anthony Davis (he’s missed fewer than 10 games in four of the past five seasons). Another prediction is that Talen Horton-Tucker will get the most improved player votes; he’s been in the league just two years and shows promise to improve as a shooter. The third prediction is that the Lakers will finish outside the West’s top 3, especially if injuries pop up among its aging players. But whether the Lakers dominate the regular season or not, they can still have a chance to dominate the playoffs.

The Lakers Need This to Be the Year of Anthony Davis

Wednesday, September 1 (SI.com) – In the 2020-21 season, Anthony Davis averaged 22 points, eight rebounds, and three assists per game and was selected for the All-Star team for the eighth straight time. Nonetheless, he took the floor just 41 times and scored career-low numbers in several categories (his shots at the rim were just 32%). Davis, 28, like the rest of the Lakers, had a month from winning the title to starting training camp, and was diagnosed with right Achilles tendinosis in February, sidelining him for 30 games. He then suffered knee and groin injuries in the playoffs. In looking forward, Davis’s performance when healthy was cited in the hopes he can get back to where he was. He was particularly resourceful when functioning as a center, and how he works with fellow teammates and lineup options can determine how the season will go and debunk believes he’s passed the pinnacle of his career. Whether he will bounce back this year has yet to be seen.