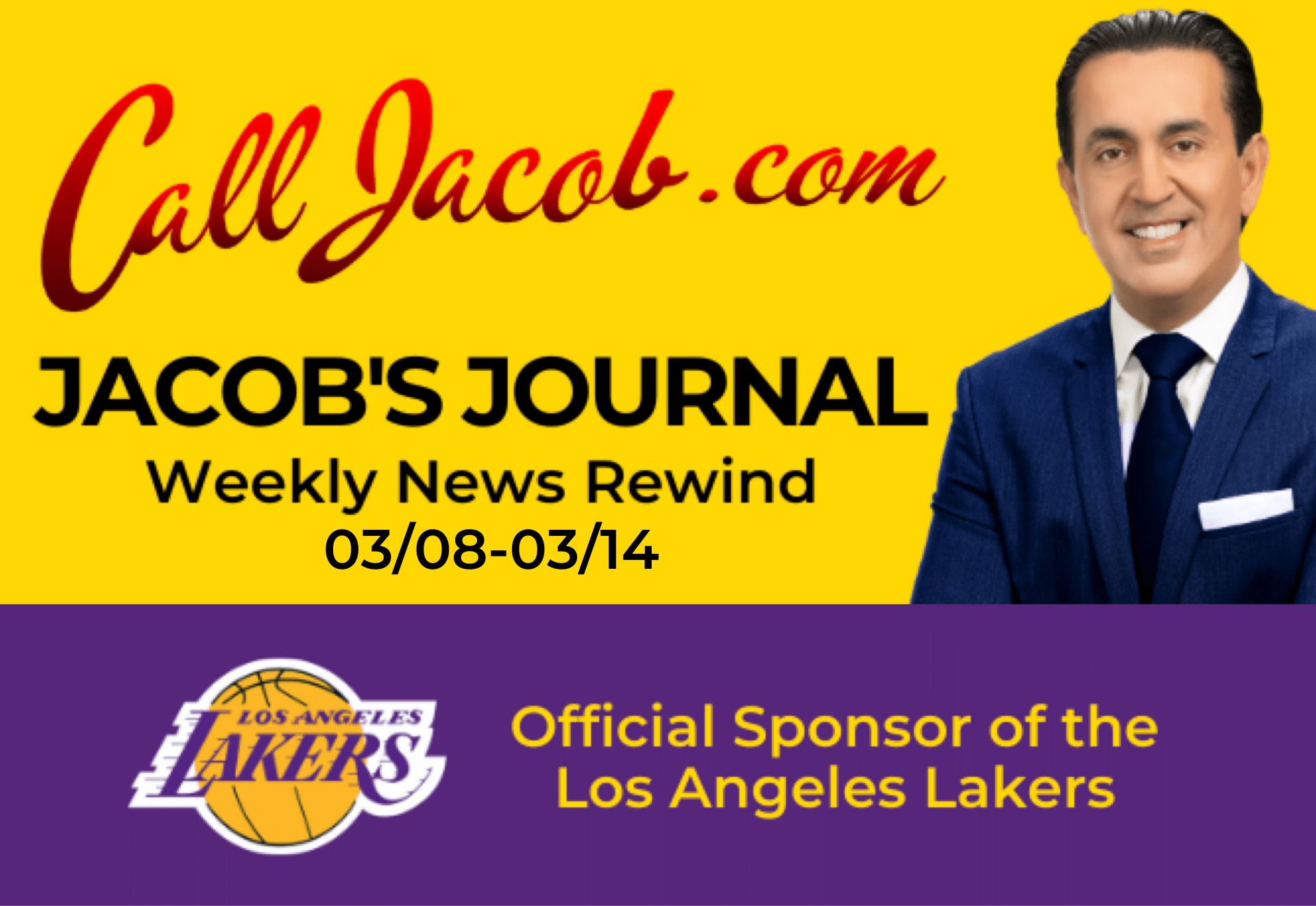 Wednesday, March 10 (NBC Los Angeles) – On Wednesday, Congress approved the $1.9 trillion COVID-19 relief bill with a party line vote in the House (aside from Rep. Jared Golden, D-Maine). The bill was passed with a 220-211 vote with unanimous opposition from Republicans, seven weeks after Joe Biden entered the White House. It provides for up to $1,400 direct payments to most taxpayers and $300 weekly emergency unemployment benefits into early September.

The bill also provisions $29 billion for the restaurant industry, expands tax credits for families with children (as well as for child care and family leave), and provides billions for vaccines/treatments, schools, airlines, and state/local governments. It includes various other forms of aid and aims to reduce the poverty rate. While those opposed to the bill criticize the spending, a recent AP-NORC Center for Public Affairs poll found 61% of Americans back the relief bill and 70% back Biden’s response to the virus.

Passing the relief bill included concessions such as eliminating the federal minimum-wage increase to $15/hour and trimming jobless benefits. For Democrats, it remains to be seen whether unforeseen issues will impact control of the Senate and House in November 2022.

Tuesday, March 9 (CBS Los Angeles) – With COVID-19 case rates improving in Los Angeles and Orange Counties, both are poised to be moved into the red tier of the state’s reopening plan. The state-adjusted average of new cases dropped to 5.2 per 100,000 in L.A. County. It could move into the red tier by March 17 if new case rates remain under 7 per 100,000 and test positive stays below 8%. Orange County, which had been moved to the red tier last September, was on the same track following new restrictions imposed during a winter surge. However, health officials continue to warn of a potential fourth surge in cases.

Wednesday, March 10 (ABC News) – The Los Angeles Unified School District and its teachers union announced a deal Tuesday in which students could return to class next month. The tentative deal provides safety measures to allow a partial reopening. If approved by the school board and union members, the plan would allow preschool and elementary schoolers to return in mid-April; middle and high school students would do so at the end of April.

Teachers, nurses, and other union members won’t have to return to work until they receive COVID-19 vaccinations. Once in-person classes begin, students will have the option to continue with distance learning. Students and staff will be required to wear masks and practice social distancing; they will also be tested for the virus before returning to school and on a weekly basis.

Thursday, March 11 (ABC 7) – Three weeks after the February 17 death of Monique Munoz, 32, police have still not charged the 17-year-old driver of the Lamborghini SUV that struck her Lexus sedan. The accident occurred at the intersection of Olympic Boulevard and Overland Avenue in West Los Angeles. The Lamborghini driver, later hospitalized, was traveling at a high speed before the crash; on February 23, he was booked for vehicular manslaughter, the LAPD said. Munoz’s family has expressed anger with District Attorney George Gascón for the teen not being charged. Since taking office in December, Gascón has stirred controversy by changing how defendants are charged and being lenient on certain crimes involving juveniles.

Wednesday, March 10 (NBC Los Angeles) – A two-vehicle head-on crash in Lake View Terrace on Wednesday killed two people and critically injured three others. According to the LAFD, firefighters responded to the accident at about 12:25 a.m., around the 11200 block of North Wheatland Avenue near Foothill Boulevard. Two victims died at the scene; the injured victims were transported to a hospital in critical condition, an LAFD official reported. The events leading up to the crash were not immediately available.

Wednesday, March 10 (CBS Los Angeles) – A big rig lost control, crashing into an embankment near the transition road to the southbound 5 Freeway, on Wednesday afternoon, closing the eastbound 118 Freeway near San Fernando. The California Highway Patrol reported the accident occurred at around 1:00 p.m. Crews worked to recover the stuck big rig, while no injuries were reported. Caltrans advised drivers to avoid the area and find alternate routes.

Tuesday, March 9 (CBS Los Angeles) – On Monday, a 43-year-old man was killed after falling into a pit at the Los Angeles Hyperion Water Reclamation Plant in Playa del Rey, prompting an investigation by the LAPD and Cal OSHA. The LAFD was called out to perform a confined space rescue for the worker. Los Angeles Bureau of Sanitation spokeswoman Elena Stern said the man was a contractor at the plant. The fire department reported that he had fallen 25 feet into a 15 x 15 foot pit, which was mostly dry at the time.

Monday, March 8 (NBCDFW) – According to police in Arlington, TX, the Castle Hills Police Department arrested Chico Martinez early Sunday morning in connection with a hit-and-run death in October. Police said that, on October 13, Martinez was driving eastbound on E. Sanford Street and failed to yield to a motorcyclist traveling northbound on N. Mesquite Street in Arlington. Officers arrived at the scene at 6:40 p.m. where witnesses described a black Dodge pickup truck with an orange construction toolbox last seen heading eastbound on Sanford Street towards N. Elm Street. Martinez was charged with one count of Accident Involving Death and taken to Bexar County Jail on $35,000 bond.

Wednesday, March 10 (KTLA 5) – As Los Angeles struggles to secure enough COVID-19 vaccine doses for eligible individuals, Mayor Eric Garcetti said he expects availability to be widespread by summer. County health officials began vaccinating janitorial and custodial workers on Wednesday. On March 15, people with certain health conditions and disabilities will become eligible. But “in coming weeks to probably no later than two months from now,” Garcetti estimated that anyone will be able to get a vaccine.

The county remains in the most-restrictive purple tier of reopening, but is expected to soon advance to the red tier, while classrooms are expected to start reopening for in-person learning by mid-April. The daily increase in new cases is averaging less than 700 a day, the lowest since last April. COVID-19 was named the leading cause of death in L.A. County last year. Garcetti also encouraged continued vigilance in March, warning of virus mutations and the importance of vaccinations keeping up.

Tuesday, March 9 (NBC Los Angeles) – Officials postponed a vaccine clinic scheduled for Thursday in Pasadena after a registration link was sent to entertainment, news, and production individuals, who are not yet eligible. Individuals who are not Pasadena residents also received the link. Ineligible sign-ups accounted for more than half of the 1,500 appointments, according to city officials. The violation was revealed by a Los Angeles Times reporter questioning the link.

Currently, eligible groups including healthcare workers providing direct care, residents and staff of long-term care facilities, and people 65 and older as well as childcare/K-12 education staff and food/agriculture workers. Yet there have been many reports of attempts to jump the line, including at a public housing complex in Los Angeles where registration codes were obtained by non-residents. As far as COVID-19 restrictions, L.A. county is expected to advance to the red tier of California’s reopening plan once the state has administered 2 million vaccine doses to hard-hit communities.